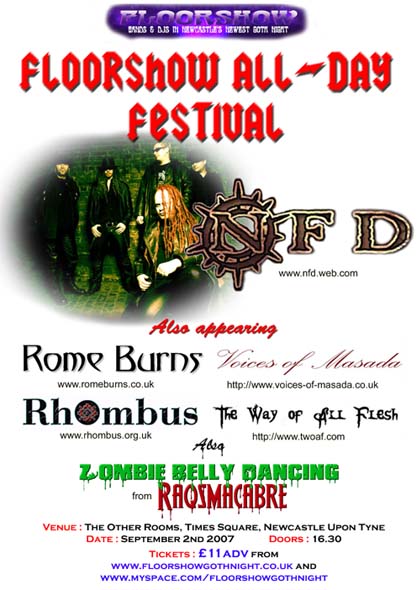 Name: The Floor Show
Line Up:

Venue: The Other Rooms
Address:

“I’ve not seen many reviews of the gig of course, but the chaos of the soundcheck didn’t result in a bad night at all. If the music is good, the audience don’t seem to mind technical and running issues I guess :D. Mind you, being as there were so many bands there, I’m not entirely sure how many of the people there were actual punters. Kev will probably be able to answer that. Our set was interesting. It was pretty close to the West Street Live set with a track dropped out. Mostly stuff that isn’t on Esprit as well. I managed to snap a string in the 2nd song which was a little annoying as I’ve been enjoying playing the Les Paul Gothic at the moment and didn’t want to change! After that we had a repeat of the drum machine not starting quick enough on ‘Echoes’ which happened at a previous gig. As I have to count the beats at the start of that track to know where to come in, it meant we had to restart the track which never looks good. Apparently it’s something to do with there not being enough space at the start of the midi track for MojoJojo to get ready, or something. We played some nearly ultra new stuff; Killing Floor and 2MinutesHate have only been played live once before. They both sounded very odd on stage and I wasn’t sure how they were going down, but both got a good round of applause. I also managed to slide a chunk of skin off my strumming hand thumb. Serves me right for poncing around with my guitar I think.

Next gig is in Leeds on the 23rd with Zeitgeist Zero and Memento Mori, and then a new one at the Grapes (not played there in AAGES) on the 30th with Cobwebs (which I think is their live debut?)”