Screaming Banshee Aircrew
The Way Of All Flesh

A Livejournal entry, culled from the distance past..

…..Kev at Avalon turned up and showed us their refurbished PA. We decided to hire it, and some monitors. The organiser at the gig said that he’d be arranging some monitors, a PA and a sound guy, but with the general disorganisation of it, we decided to err on the side of caution. Probably a good idea.

After brief trip to pick up my wallet which had turned out to be at Tesco, I got the last of my stuff together and then we set off for Bradford. We hit Netherthorpe road when I realised we had no map, but being ‘Gung Ho Bastards’ ™, we decided that we knew that Bradford was ‘North’ and near Leeds and that we’d buy a map once we got there.

The drive up was really good. The motorway was clear, the music good, the sun was shining and the speedo hitting a ton. Oh, there was a cop who appeared to try and pull us over, which would have been bad considering the amount of stuff in the car, but he just wanted someone in front of us. As Absolution ended, we breached the ring road of Bradford, pulled into a petrol station, bought a map, got a series of incomprehensible directions and then set off again. Luckily I had my ultra-navigation head on and pretty much got us straight there. It must have been about 4pm, which was a bit later than hoped but early enough.

So, the ‘Venue’. Now, I’d fucking love the Exchange if it was a pub in Sheffield. As a pub. It’s dark, dingy, all brick, good music, interesting layout. As a music venue? Perhaps not! No stage, no sound engineer, no expertise, no dressing room, no parking! I couldn’t work out where we were going to set up! Still, we unloaded into the fire escape, with our mountains of kit (therefore breaking fire regulations, not that they cared really as all the doors through there were locked, barred and deadlocked) and I promptly went looking for the organising guy, who wasn’t there yet. Never mind! We’ll have a beer and check out the rampant Fleshies who’d already arrived.

Eventually, all of twoaf had arrived along with SBA. People were looking nervous. We still had no idea, and we were due to start ‘sound checking’ at about 5:30~6. Eventually, I wandered over to the bar and asked about our organiser dude. Apparently he wasn’t likely to get there till 7. Eh? Never mind!

So, we decided that we should take some action. I kicked the drunken goths out of the corner where the bands usually go and started moving tables, chairs and stools. We set up our hired PA, the mixer, the poweramps, the monitors, the job lot. We created a wall of amps. We then looked for power. Hmm. 2 wall sockets, and a 4 way hang from the ceiling. Hang about? We’ve got counts 13 things requiring power? Two of which are power amps? I popped over to the bar, asking about the organiser again, and about when the sound engineer would turn up. The woman behind the bar appeared confused. A sound engineer? And then disappeared. Eventually she returned with a rather drunken bloke, who can do that sort of thing, but not after 7 pints. He was able however to point out an extra plug socked 10 metres away which we used with a large extension. Kate did a head calculation and decided that we weren’t going to set anything on fire, so we daisy chained up our 4 ways and extension leads.

So, finally, we’d sorted the power and started on trying to get the equipment all working. I went back to the bar again, asking about the organiser and his sound engineer to be told that he’d been here for about half an hour, but left to go get some food. Amazing! We still had no idea what was going on and that was the point when we just gave up. I went back to Kate and said that we needed to do it all. So, that meant getting the desks and the poweramps talking to the monitor, all the levels sorting etc. We discovered that one of the channels on the monitor amp was knackered, reducing us to one which would have been a pain in the arse, but at least we had some. Then on to getting the PA working. At that point we got the SBA’s guys to get out and start checking levels.

It is always an extremely strange situation to be sound checking with your audience there. The place was quite packed, with the Carpe Diem guys still playing some tunes, and SBA had to start playing some of theirs tracks so Kate and Kris could get the levels. Luckily SBA use radio mikes and leads, allowing the majority of the band to walk out in front, right into the crowd of people to check the quality of the sound from the PA. We started to get somewhere.

Suddenly, the organiser turned up. Hurrah. Where is the PA he was organising? Not got one. What about monitors? Nope. The sound engineer? He’s been trying to ring him, but he isn’t answering his phone. Oh. Do you have anything? Yes! In the back room they have a poweramp and a speaker! Grabbing this we replace one of the monitors and the amp powering it, so we now have decent monitoring!! Bit better! Bloody good thing we hired em eh?!

So, SBA finished their sound check. It’s 8:30, the time we were supposed to be going on. Oh well! I turn my amp up to 1 o’clock, we run through ‘The Unknown’ as a quick sound check and all seems fine.

We muck about a bit, I detune my guitar for the first and we are ready to go. Dave rather sheepishly announces to the crowd that this is actually the real thing and we launch into ‘Fragile World’. The brief intro is over and we kick in.

Playing in front of an amp which isn’t mike’d up is weird. Your amp needs to be a lot louder. In fact I realise I’m so loud that I can’t hear the drums in my monitor. World is a bitch if you can’t hear the drums. It’s a great song, but sounds BAAAAAD if you are out of time. I also realise that 3 bottles of brown ale before the gig was a bad idea as I’ve got that ‘fuzzy out of touch with the world’ feeling. Too late now! Still, I think we pulled it off! Fragile World finishes to a smattering of applause and cheers, I tell Kate to turn my monitor up, retune for the next song. We start ‘Sleepwalking’ and it all clicks into a normal gig. The songs slide by as they always and with Dave enjoying his new found freedom with Jo’s radio mike, attracting the attention of a rather pissed lady. She asks him to pole dance during one of the songs, to which he rather cryptically replies to the whole venue, “I can barely touch my toes!”

The set was as follows:

We had to chop some tracks from the set, due to a lack of time because of the late start, but this was probably a good thing. I suspect a lot of the crowd were getting a bit impatient for SBA by then. All in all, once it got going, it was great fun. It was the first live play for Blood and Sand, our newest song but I think it did pretty well. There wasn’t a great audience reaction through the whole set, but people seemed to start to react to Blood and Sand which is encouraging. Spurred on by my lack of string breakage, I did hit that guitar pretty hard all the way through which probably looked pretty good 😉

So, we go off, SBA come straight on and go for it. They are great live, lots of silly posturing on chairs (well, they didn’t have a stage!) and wandering about the crowd. I think Ed needs better batteries for his mike though! They play a long set and eventually it’s time for us to pack down. Not fun, especially with all the kit. This time we spread it across 3 cars, allowing more space to bring more fleshies back with us. The organiser comes up and we sort cash. He upped the cash. I think he was feeling a little guilty, and to be honest I think they impressed with how many people came to see us. Well, SBA anyway ;). 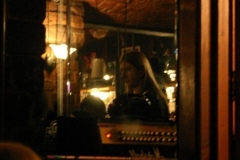 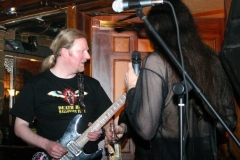 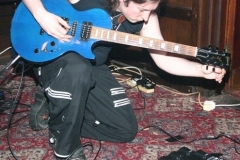 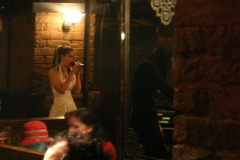 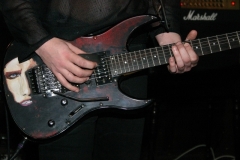 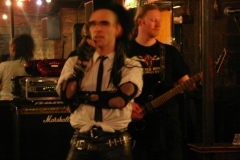 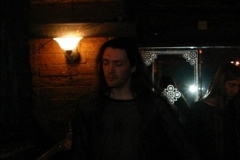 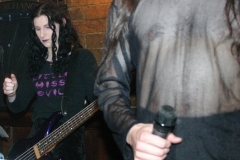 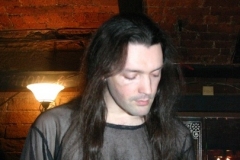 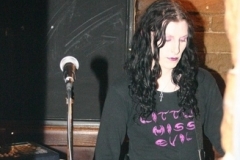 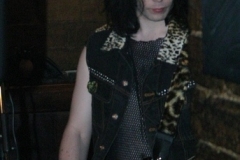 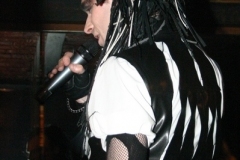 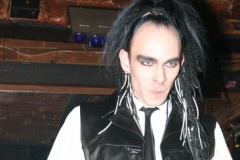 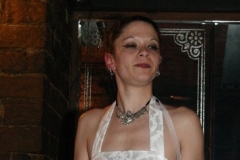 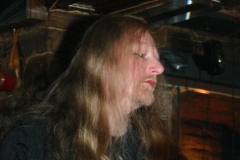 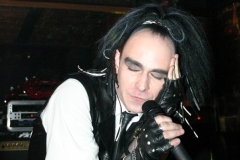